Breast cancer is the leading cause of death of women in the entire world today. More than a million women are afflicted every year with North America having the highest incidence rate with one out of eight women getting the disease. Next comes the northeastern European countries followed by Australia and New Zealand. Our country should be proud because we are in the Top Ten Breast Cancer Hotspots of the world! In fact, we have the highest incidence rate in Asia - much, much higher than China or Japan. 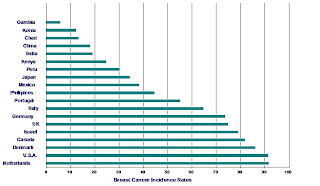 Yet we are not a highly industrialized as the USA, nor are we agriculturally productive as Australia, nor do we have a huge wide area of land with a population as that of China. In fact our country is even an archipelago surrounded by the China Sea and Pacific Ocean.

The Hereditary Factor is Misleading

If we are to believe medical science, Filipinos must then have a genetic predisposition for breast cancer. Despite our different dialects, we must somehow be related to one another to have a high degree of hereditary factor because breast cancer is afflicting all women from as far north as Batanes to as far south as Tawi-Tawi.  In fact, breast cancer today tops all cancers for both men and women. Because of this epidemic situation, our Department of Health has had a Breast Cancer Desk for more than 15 years – unfortunately just that - a desk. 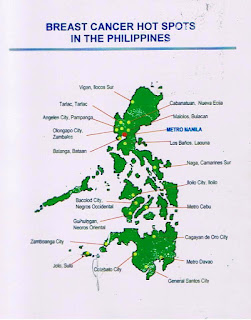 So, does it have something to do with urbanization? Nope! The Cordillera Autonomous Region and the National Capitol Region both have cancer as the 3rd leading cause of mortality. Population density? Nope! CAR has the lowest in the country with less than a hundred per square km., while the NCR has almost 15,000/ sq.km. Poverty? Nope! In the NCR, cities with the high concentrations of urban poor have similar incidence rates of cancer as cities with the low concentrations of urban poor.  Education? Nope! We have as much affliction among well-educated women as uneducated women. Being childless? Not at all! Having children does not prevent breast cancer, as several cases have been diagnosed shortly after having given birth..

What about Religion? Maybe so, but it isn’t because of spirituality. Muslims don’t eat pork while Christians do and this could probably be a reason why the former are less afflicted. So maybe cancer comes with what we eat? Actually, mounting evidences in the past decade of breast cancer advocacy in North America have clearly established the environmental link to breast cancer with as much as 80% of breast cancer cases having been due to the environmental – meaning what we eat, what we drink and what we breath.
Breast cancer is a hormonal disease, particularly involving estrogen. There have been identified specific chemical groups that are estrogen copycats. Since most of the estrogen receptor sites are located in the breast area, the lifetime exposure of a woman to foreign environmental estrogens increases her chances of getting breast cancer. It takes 5-10 years before the first symptoms appear. The longer a woman lives in a toxic environment, the greater the risk of getting breast cancer. So do we chop off the breasts once a woman is born? Do we just remove all her reproductive organs as a preventive measure? Do we just find ways for her glands to stop the production of estrogen? To what extent will we interfere with a woman’s body?

Medicine and science has never been challenged as it is today.  The advent of breast cancer advocacy, which puts forward a patient’s perspective as opposed to a non-patient’s point of view has resulted in a shifting paradigm.

What is causing breast cancer in the Philippines? Enough evidence exists to raise serious concern on the environmental link to breast cancer to make this a priority for investigation and evidence-based regulatory action. 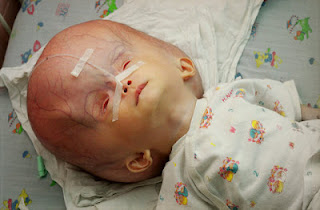 Why is cancer the leading cause of death in Central Luzon? Why does Pampanga, particularly Angeles City have the highest incidence rate of breast cancer in the entire country? The undetermined volume of “Agent Orange”, a chemical used in the Vietnam War by the United States were stocked and flown from the US Air Base. The legacy of Agent Orange has affected the reproductive health of the people of Pampanga, particularly women and children resulting in numerous cases of leukemia, child birth defects and breast cancer. Dioxin is one of the most toxic substance ever created by humans. 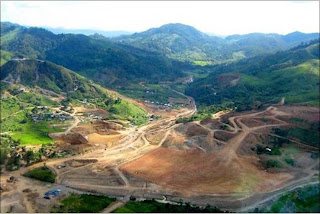 What about the Cordillera Autonomous Region? Despite being in the highlands, the soil, water and air supply have been severely affected by many years of mercury and cyanide from gold mining and the continuing practice of pesticides in the vegetable growing areas. At least 10 tons of mercury are released by the entire mining industry annually into the environment. Guihulngan, a very small and sleepy town 100 kms north of Dumaguete has a very high rate of breast cancer. Just across this sleepy town is Atlas Mining, now shut down due to environmental damages. The 6.9 MG earthquake that hit Guihulngan on February 2012 have most likely released and further caused the spread of mercury and cyanide that had accumulated over the years in the water table of this town. Expect an increase of breast cancer in Guihulngan and nearby areas in the coming years! 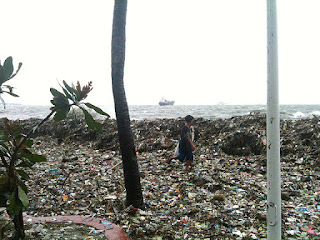 And the National Capitol Region? Surrounded by the one of the most polluted and contaminated bodies of waters in the entire world – Manila Bay, Pasig River and Laguna Lake – it wouldn’t be difficult to understand why breast cancer has become an epidemic. San Francisco and New York have the highest rates of breast cancer in the world and numerous studies have shown the toxicity of their bodies of water, primarily caused by toxic dump sites five decades ago. The typhoon on August 2012 brought back to the tourist boulevard of Manila Bay all the trash for the world to see.

What is even most particular to the Philippines is the government’s population control program of oral and inject able contraceptives.  Thousands upon thousands of women have been put to great risk with the early and prolonged use of the pill, undeniably a risk factor for breast cancer. Furthermore, numerous women are required chest x-rays for pre-employment, pre-enrollment and annual check-up’s as against selective screening. The supposed minimal amount of radiation cannot be discounted because it is never dose-related but a matter of timing of exposure. These periodic amounts radiation of women’s breasts have put so many at great risk.

As our country grapples with a sinking economy that has impoverished the vast majority of our people, health safety has become a class privilege in the pursuit of work. Thousands of migrants to urban settlers have had to live in subhuman conditions, eat unhealthy foods, drink contaminated water and toil in unsafe working environments. Thousands of the rural population have had to allow the devastation of their bays, rivers and mountains by various industries.

From being an environmentally sound archipelago just a century ago with natural resources so vast and plenty, the Philippines is fast becoming an ecological disaster whose signs are now clearly seen in it’s people health, with breast cancer as the tip of the iceberg.

Wherever and whenever in the country the PBCN has conducted symposiums, the matter of health and the environment has not only clarified misconceptions but has also empowered women in taking strong actions to prevent their daughters from getting breast cancer.

Corollary to this, government and industry will sooner or later adhere to the Precautionary Principle – that of acting upon evidence rather than waiting for absolute proof. The medical profession will also sooner or later adhere to the patient’s Right to Informed Consent – that of full disclosure of all information and options, and most importantly, total respect for her decision.

Numerous scientific studies showing the environmental have already been presented in more than five World Conferences on Breast Cancer held in North America since 1997. Just a few days ago, the US Senate has passed the Safe Chemicals Act which shifts the burden of proof from government agencies to producers and manufacturers to prove their products are safe for public use and consumption.

In the Philippines? The current President would rather lift the ban on mining and simply provide funds for women who will get breast cancer!

Breast Cancer is no fun at all !!!

Posted by danny meneses at 12:12 AM No comments: