When a woman hears the word MAMMO, what enters her mind?

Try typing the letters MAMMO in your search engine and see what comes out - Mammo, a film by Shyam Benegal released in 1994.....A "long bomb" home run as first described by Atlanta Braves career player and third baseman Chipper Jones (#10) ..........Mammo: Mammography/ Breast Imaging......or referring to the mammary gland.  Of these four, what would be the most common understanding to one's mind upon hearing the word MAMMO? 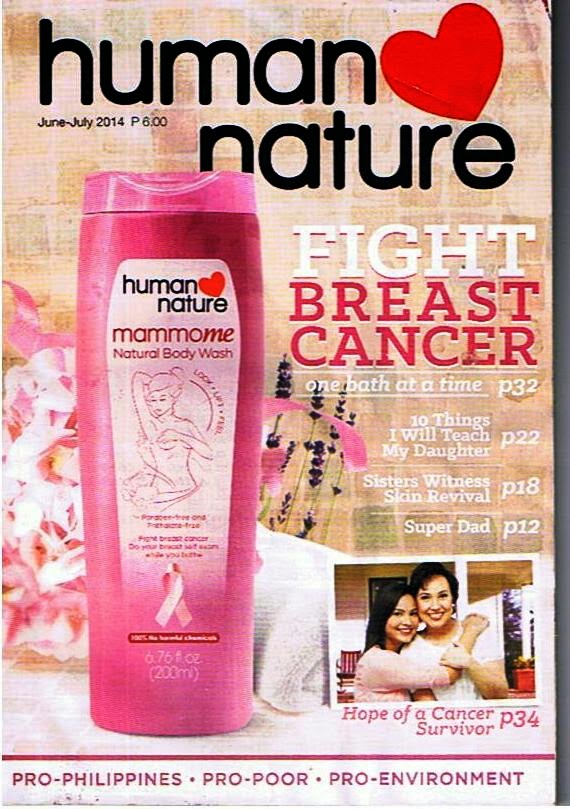 Well, there is now a self-proclaimed "pro-Philippines, pro-poor and pro-environment" passionate enterprise called HUMAN NATURE that provides personal care products in the Philippines, the United States of America and other countries worldwide. Unfortunately, it turns out that this company is anti-women and really only interested in making millions from the lucrative and huge market of women because of its corporate support and promotion of mammography.


In a message received by the PBCN on 20 June 2014 from the company's President Anna Meloto-Wilk: "MammoMe was an initiative of Kasuso Foundation and they were the ones who approached us regarding the idea. Since we are a company that believes in a healthier lifestyle and in promoting products that are safe, we think it's a great collaboration."

"The name of product itself - MammoMe - also came from the party of Kasuso Foundation and their agency. The root word "mammo" refers to the breasts, to the mammary glands, and is in no way intended to relate to mammograms."

"If you look at all our promotional materials, you will see that we heavily concentrate on instilling the habit of doing breast self exam which every consumer can do without any help from a doctor. We firmly believe this is a great way of empowering women in taking better care of their health and in knowing their body better."
"Lastly, a big part of MammoMe is helping indigent women who need financial help in getting the health care they need. A significant portion of the proceeds go to funding medical treatment for them." 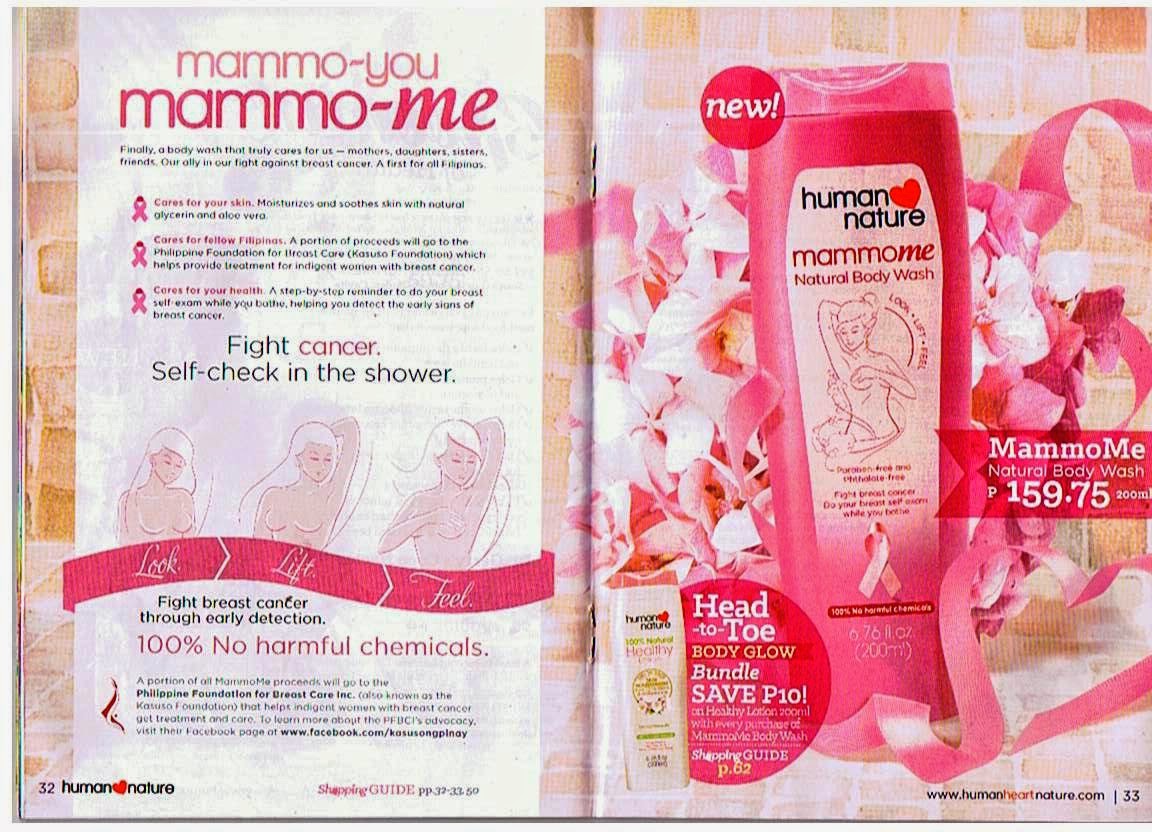 Is the company into prevention of breast cancer or treatment of the disease? Are the company's products meant to prevent breast cancer or meant to augment breast cancer detection?  It proudly states that their products are 100% NO harmful Chemicals and yet they are telling women to regularly self-exam their breasts in the shower. Well, the more you consume their natural body wash product, the better for them cause most women will never feel a lump in the shower until it is already palpable. So what good is the company's campaign to fight breast cancer? There is NO such thing as early detection because it takes 5-10 years before the first symptoms of breast cancer are manifested. Furthermore, once a breast lump is felt in the shower, what next? Aha! You are to undergo a mammogram! So can  Anna Meloto-Wilk honestly insist that their product in no way is intended to relate to mammograms? 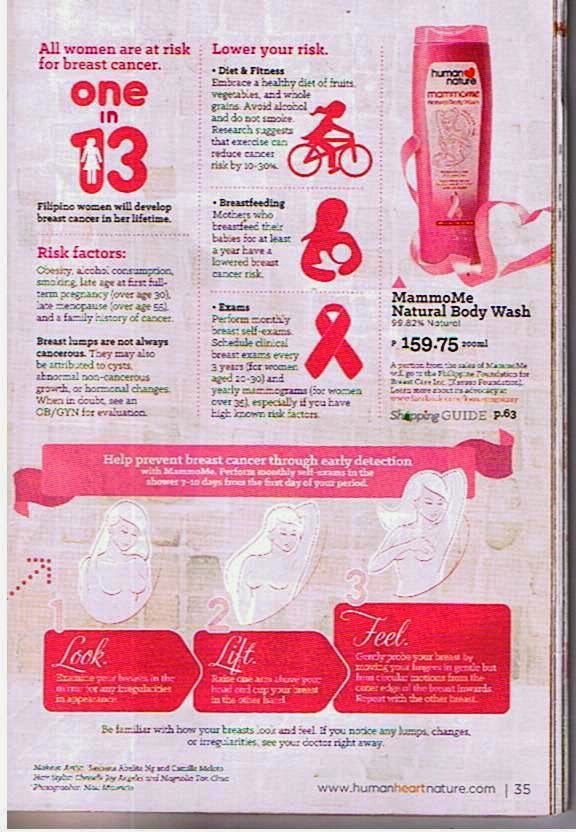 Mammo-you, Mammo-Me?  To my knowledge, this is the very first time that a company in the whole world has engaged itself in the full support and promotion of mammography! (The PBCN challenges the company to market Mammo-Me in the USA.)
One in 13 Filipino women will get breast cancer in her lifetime BUT is this meant to instill fear or should it be taken as a wake-up call for women to act on preventive measures instead of detection? To take action on eliminating the environmental causes of breast cancer such as paraben in personal care products!

Sadly, Anna Meloto-Wilk has allowed herself to be grossly misled by vested interests of the breast cancer industry to believe that lowering one's risk of breast cancer is solely on diet& fitness, breastfeeding and monthly self-exams.  Think about this: a woman has a negative reading from her annual mammo year in and year out till one day, there is a suspicion and finally, she is said to have a malignancy. So where is prevention? Self-exams, especially mammo is just to tell you of an existing problem - not preventing it from happening.

HUMAN NATURE has to immediately change their entire campaign into breast cancer prevention - NOT breast cancer detection. They are very much in a position to do so because of their paraben-free products!  By heeding this serious and urgent concern, Anna Meloto-Wilk can now truly say that her company is Pro-Women! Meanwhile, HUMAN NATURE is just another pink washer!