When will breast cancer end? 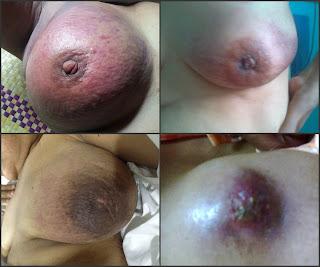 “If only it were detected earlier, something could have been done.” These are the often heard words of doctors. Very true, but what is that something? Breast removal? Chemo? But even then, when is early detection? How many years ago?

The reality is that breast cancer is most very often realized in advanced stages because it takes 5-10 years before the first signs and symptoms of breast cancer are manifested. This being the case, no woman can be blamed for seeking medical attention at advanced stages of her ailment because they never had any understanding of the disease in the very first place.

When does a woman know she is pregnant? Does it mean that when she misses a monthly menstrual cycle, it can be said she is pregnant? Only with a pregnancy test can she be positive she is pregnant. Therefore, it is only after the fact. Because even without a test, she will know she is pregnant as her tummy starts to grow. But what if a woman misses her monthly cycle but has never had sex, typically among nuns? Would a nun or virgin still submit to a pregnancy test? And what about lactating mothers who notice a lump in their breasts? Would they ever think of a breast disease, thinking that the lump is just milk?

Of course, pregnancy is different from breast cancer because the former is acceptable while the latter is not. Most, if not all women want to get pregnant but no women would want to get breast cancer. A woman can wait and see if she is pregnant but every woman would not want to wait and see if she has breast cancer. Doctors are then just waiting for all women to come to them when they already have breast cancer - and this is called “early detection?” Pregnancy tests are very safe and reliable while mammography is not safe and not reliable. Why else is a biopsy done after a mammogram? 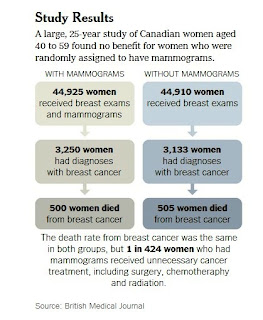 Mammography is NOT early detection! Having annual mammograms is just waiting to be told one day that a malignancy is now detected, despite many years of undergoing mammography that showed benign results. Mammography has a margin of error of 20% for women 50 years & above and 40% for women below age 50 (false positive and false negative).  Mammograms have caused much over-diagnosis and over-treatment, especially in cases of DCIS (Ductal Carcinoma In Situ) because it is non-invasive. Somewhere between 30-50% of DCIS will go on to become invasive but 50-70% could safely ignore it and never have a problem. The dilemma is that there is no current technology to determine whether a woman’s DCIS will become aggressive or not. Because of this uncertainty, women are over-treated with surgery, chemo and radiation – simply waiting whether it will become malignant or not. Although DCIS is pre-cancer, the diagnosis brings much fear, bewilderment and difficult decisions for the woman and her family, most especially when understanding and knowledge of the disease process and non-invasive/non-toxic options are absent. 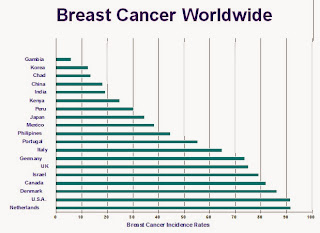 This October, the PBCN urges women and men to join us in removing the pink ribbon blindfold and ask “why are more and more women getting breast cancer?” Why has the incidence rate of breast cancer in the Philippines increased from 1 out of 32 in 1980 to 1 out of 13 today?  Why does our country have the highest incidence rate in Asia and the 10th highest worldwide? Why does government refuse to acknowledge the environmental and occupational risk factors for breast cancer when the evidence is already out there? The general public needs and deserves a full understanding of ALL potential risk factors for the disease that threatens ALL women – rich or poor, young or old, with or without child, learned or unlearned, Christian or Muslim, whatever ideology or political persuasion. 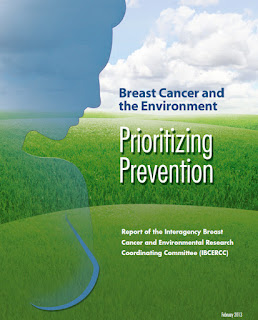 Government and media continue to focus on “lifestyle” risk factors such as diet and exercise, while ignoring the potential 60% of breast cancer cases for which they have no explanation. What about the role of chemical, environmental and occupational exposures? Why, when the WHO (World Health Organization) states that prevention (which is not the same as early detection) offers the most cost-effective long-term strategy for the control and decline of breast cancer in our country?

Why is primary prevention (stopping the disease before it starts) not given priority over treatment and care? Why are those with the power to influence decisions on public healthcare not acting on what we already know now? Why do they persist in refusing to acknowledge the role of environmental and occupational toxins by ignoring decades of evidence up to the present day on the link between lifelong (womb to grave) exposures to toxins and the escalating breast cancer epidemic in the Philippines? 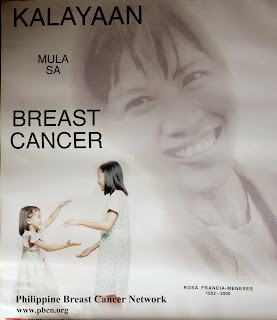 Since 18 years ago when the PBCN was established, countless women from all over the country (as well as OFW’s worldwide) have taken contact by email, phone call and SMS for varying reasons: from asking what to do and asking for financial aid. All inquiries were promptly replied to: 24 hrs daily, 7 days a week and 12 months a year for the past 18 years. All were given information to arrive at fully informed decisions. But what the PBCN does, barely touches the surface. Not all women have internet nor a cell phone, and neither can the PBCN exist forever.

The PBCN addresses women with breast cancer, women not yet with breast cancer and women still to be born.  Though the first is most immediate, the last is what really matters. Ask any candidate in the forthcoming elections their stand on breast cancer and let us elect whoever will make our country free of breast cancer!  Whoever gets elected President or Senator has to firmly act and not continue the deafening silence of government on this grave public health epidemic.

Posted by danny meneses at 11:49 PM No comments: