Former President Joseph Estrada totally banned mining during his term but his predecessors have since lifted the ban.. In fact, during President Nonoy Aquino's state visit to China two years ago, four Chinese mining companies agreed to invest US$14 billion in mining operations between 2011 and 2014.


China's rapid industrialization needs has led to thousands of small scale mining operations in more than 30 provinces. Being the 12th largest source of gold in the world, the Philippines has become the 3rd largest gold exporter to Hongkong, after Switzerland and China itself with total shipments averaging 80 tons annually since 2010 from a measly 11 kg in 2001. Mt. Diwalwal in Compostela Valley is considered to have the largest gold deposit in the world and alone has about 30,000 miners (60% of all the country's artisinal miners). Today, the Naboc and Agusan rivers are grossly contaminated with mercury and cyanide and these long-lasting elements have accumulated in the ground water and food chain.

In Bulacan, enormous amounts of industrial waste and mercury is dumped into the Marilao-Meycauyan-Obando river system from small-scale lead recylers in Marilao and from leather tanneries and numerous gold jewelers in Meycauyan.

These effluents go directly into Manila Bay and find their way to Cavite, a clear symptom of which are the contaminated shellfish. Both Bulacan and Cavite are now experiencing an alarming rate of breast cancer cases.


Years ago, I visited Guihulngan in Negros Oriental (100 kms north of Dumaguete City) where I learned that it had the highest incidence rate of breast cancer in the province. How could a small and sleepy town have an epidemic? What was common among the population was their ground water which I already suspected. When the weather was too rough to travel by sea from Dumaguete to Cebu City, one could travel by land to Guihulngan and take a small boat to Toledo and then take a land ride Cebu. What was in Toledo? Atlas Consolidated Mining and Development Corporation whose operations were stopped when fisher folk complained that its tailings had so contaminated the fishing grounds. Guess where all the mercury and cyanide had also gone? To the ground water of Guihulngan.

In the recent earthquake that hit Guihulngan in February 2012, a rapid increase of breast cancer cases can be expected when all the mercury and cyanide were abruptly released from the groundwater.
And with the recent typhoon that hit Compostela Valley in December 2012, also expect an outbreak of breast cancer when all the mercury and cyanide from the mining areas widely spread. 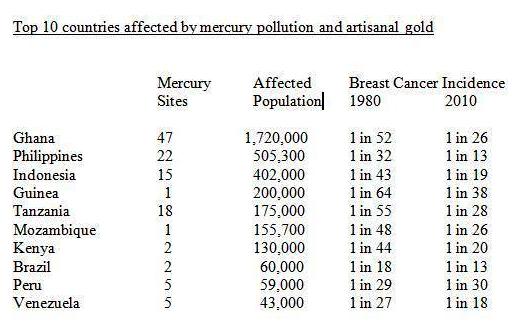 One out of 13 women in the Philippines will get breast cancer during her lifetime and only a firm environmental solution can reverse this public health crisis.